This is a good game to start 2023. I simply loved it even if I kept being killed before reaching the end.

Awesome game and for sure one of the best free C64 single player games in recent years! 😎👍 Our German-language review can be found in our recorded livestream starting at 01:09:13 and there is also a longplay starting at 04:29:54. Automatic subtitles should hopefully be available via YouTube soon (switch on, if necessary). Subscription to our YouTube or Twitch channel is welcome. 😊

I really would love a "save to disk" function. Right now, I'm using an Action Replay cartridge (on real hardware) to freeze/restore and it works - but it would be nice it were easier to resume playing from where I left off.

Happy to buy this game.  Congrats.  Plays very well.  Hope it gets a Zzap!64 Sizzler Award!

Excellent game. Best release of the year so far. Well... Considering it's only January. LMAO

Can you somehow play this in a normal notebook, maybe with emulators and the likes?
cany ou give some tutorial on that?

Yes, you can. I developed and tested this game on a PC, so it's viable. I used this emulator:

Delightful game. Been playing this on my Steamdeck and it's just lovely. Super polished.

Reply
Richard of TND20 days ago

Great game with some wonderful graphics. Music is also good, and the game is pretty addictive. Well done.

A great game, graphics are very nice and colorful, it works perfectly on The C64 full size. Congratulation ^^ !

Why high score table if there is no score counted?
You can save check points to RAM at computer terminals.

Supernice game! I like the used color palet and background graphics. Maybe some extra sound FX when you enter the computer... I mean, the sound of the beginning of a Boulderdash level. Congrats with this masterpiece!

Great game! Can you please support a second firebutton?

cool stuff, not much of a metroid player myself but it's alright. 7.5/10

i like that it's not trying to be a 'sonic the hedgehog on c64', punching above it's weight, gfx all fit nicely into the hardware limitations. gg

Your game is so awesome!! I really don't know how much joy you had while making this game, but it has to be a lot, since I'm really enjoying it!

It has such a good feeling, it is great that you can't loose completely and I really want to play it to the end. I want to get further and further... Unfortunately I had not enough time to play it to the end in one run. I need a little bit of sleep. 😅 But I'm looking foreward to play again tomorrow!

The graphics are really nice, too! I really enjoy looking at, listening to and playing the game!

Thank you for this brilliant piece of fun!

I faced the issue that in the boss room sometimes no more enemies/shots appeared without the boss receiving any substantial hit before. So I could to get any more EMPs to hit it. But I was still able to move, so no hookup in general.
May be caused that I destroyed both guards and collected 2 EMPs, not only one. Someone else reported issues with collecting the same item twice. Might be the same root cause.

Hi, thanks for the feedback. It's one of the bugfix on the todo list for v1.1.

Hi, the bug has been reproduced and fixed in V1.1 which will roll out shortly. Thanks again for the report.

Great game, glad to contribute !
Can't wait for your next one :)

The text at the end is aligned to the right (and overflows) otherwise not many flaws.

Thanks! Can I ask you where you played the game (real hw, winvice, vice on linux, other)? Another player spotted the same bug and I'm collecting info for a fix in v1.1

You mean I now have to play it through to the end again! :D

Beautiful! One of the highlights of the year and after some work today, here is my longplay.

Wow, you mastered it! Thanks!

Thank you for this great game! It really is a lot of fun! I have one small suggestion for improvement: a support for a second fire button for jumping.

I have an OpenC64MegaDrivePadAdapter that also solves this problem on real hardware, but for vice emulator users it would be a nice feature, also for real hardware users, if there was native support for the second fire button.

I played in RetroArch with the VICE emulator, and mapped a second face button to Up, so I had A and B buttons as Jump and Fire. It worked really well. I assume plain VICE could do the same thing.

Congratulations on producing such a wonderful game! Everything about this game is really really top notch. As some others have stated, I think this has a good chance at being 2023 game of the year on the C64. I can tell a good bit of time and love was put into this project so I made a $10 donation. Thanks again for showing the C64 so much love!

Game looked great from BastichB's YouTube review so had to throw a few dollars your way and try it out.  Looks great.

A great and challenging game. Even though it's January, this will be one of the candidates for game of the year 2023. I bought this game for $7 because it's worth it. I wanted to buy it for $10, but I'm taking a paycheck tomorrow, I'll add another $3. :)

I wonder if there will be a sequel planned? :)

Thanks for this neat game. Can I suggest a few possible improvements for a future revision?

After destroying enemies suspended from the ceiling, it's sometimes impossible to collect the coin; it would be nice if it dropped.

Bumping the character's head against an overhead platform makes him fall straight down, and some areas require pixel perfect jumps, for instance, when backtracking from the screen that leads to door 2 when the keypad has not been found yet (early on, on the left side of the map) requires jumping over a flame to a high platform; it would be nice if the engine was a bit more forgiving.

Awesome game, great graphics, wonderful music, you really did an impressive job! I really hope you’ll keep doing it! Just gave my small contribution, thanks for this jewel!

What an excellent game. I'll definitely replay this many times over the years, like I do with other great metroidvanias from Super Metroid to Axiom Verge to Tiny Dangerous Dungeons. Your game is such high quality, it's better than most commercial NES games and even some SNES games. Thank you so much for all your work!

This is a very cool game! I only just started and got the first keycard, and into the rooms where music changes for the first time, but I can already say, this is incredibly fun and playable! <3 Thank you!

Wow! What a great looking game!
I just donated $5.00, this is definitely commercial quality!
I hope others support your work as well.
I love MINI GHOST, the PC remake that came out a few years ago,
but I never finished it because I get to a point where I've
explored the entire map and the door to the next level simply never opens, nor can I find a card to make it open.
Anyone know what I'm missing on that game?
Hopefully I'll be able to win this one, I'm looking forward to playing it on my laptop in bed for the next few nights! 8)
It's always great to see new C=64 games coming out with modern
sensibilities as it seems this has.
Great job and I hope the bug Viata mentions can be found and
fixed soon, also is it possible you could add 2 button support,
1 for jump and the other for fire & special weapon? 8)

Thanks! Regarding the second button support I'll see what can I do in v1.1. There are literally few bytes left in memory and they may be needed to fix a couple of bugs surfaced in v1.0

Understood!  8)  I grew up with a C=64 and love the fact games are still being made.

Understood!  8)  I grew up with a C=64 and love the fact games are still being made.

Nice game! Tried the game on my real C64 and will for sure continue to play the game. Thanks

Great game, just finished it.
I found a bug that made the game extremely easy for me: invulnerability.
So, I used the Shield power twice in a row(without waiting the first to end) by mistake and it bugged out making the temporary invulnerability not temporary anymore. I don't know if that bug can be repeated by the same method, but still, just had to describe how the bug happened to help you fix it.
Still, a great game and will give it another try later without using the Shield power.
Btw, there was also this, but I wonder if it's because I'm using an emulator (or an emulator on Linux): 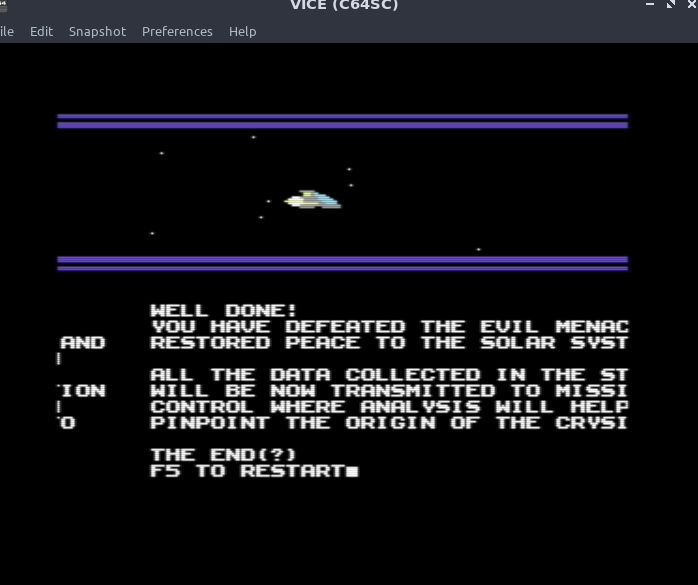 Thanks for the feedback. I'll try to reproduce both bugs and fix them in v1.1!

Just a question to pinpoint the issue... You were in the lower part of the green section? 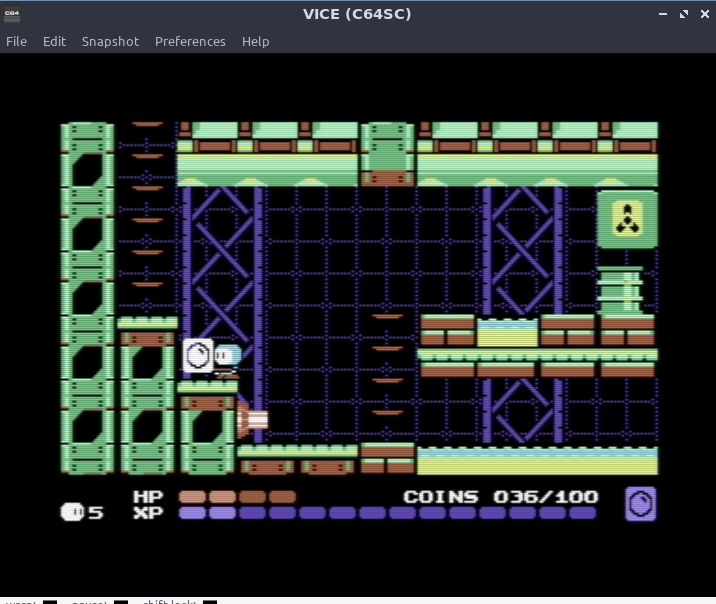 However, this time I was not able to repeat that bug.

Thanks for the details! I should reproduce and fix this easily.

Hi, I've been able to reproduce both bugs and fix them for V1.1 which will roll out shortly. Thanks again for the report.